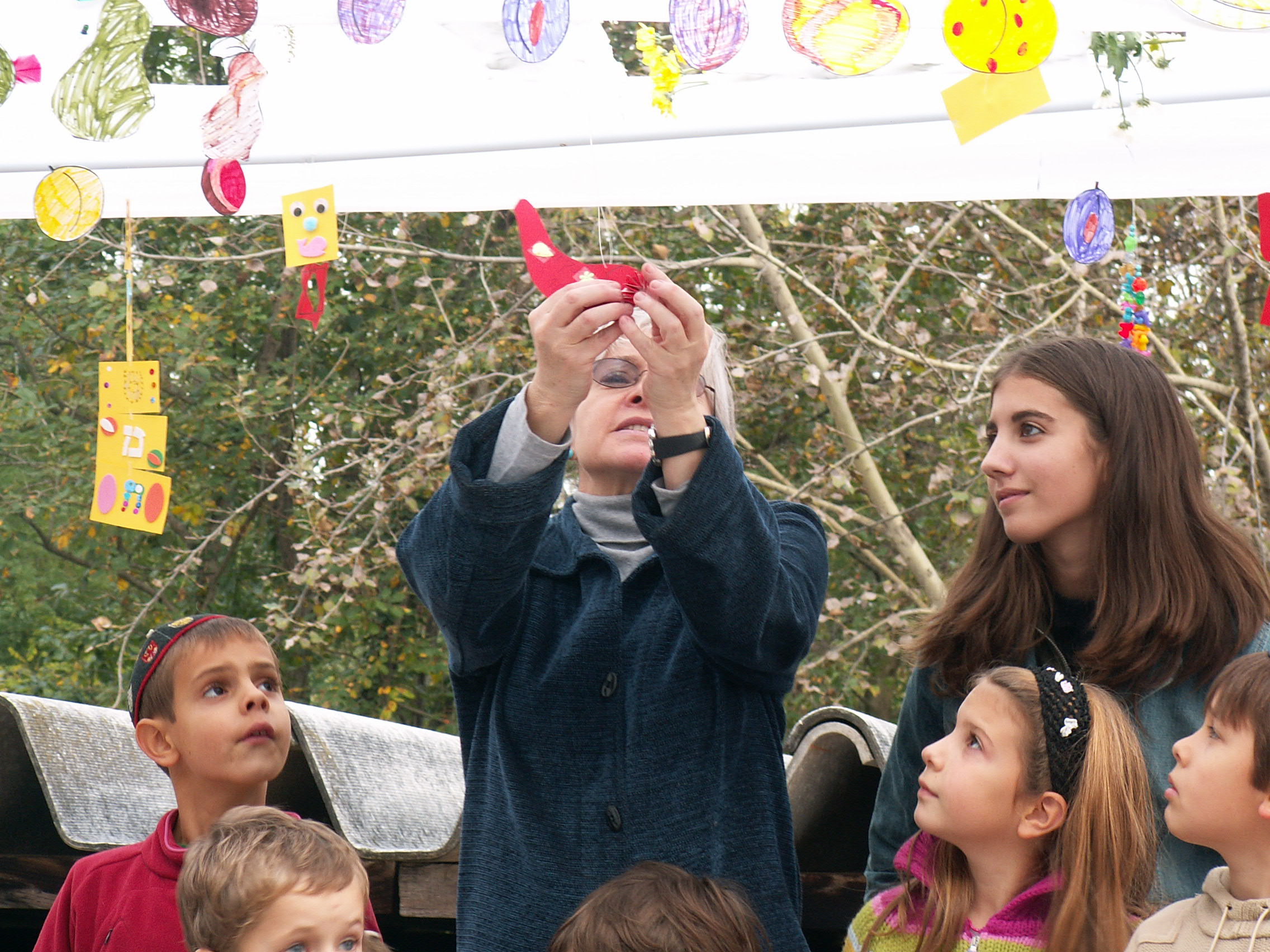 Symbols of Sukkot
The October Holiday That Binds Jews Together

My daughter, Rosie called Purim, “Jewish Halloween,” and she called Sukkot, “Jewish camping.”  And building the sukkah, eating in it and sometimes even sleeping in it is really like that… a kind of camping.

The Torah asks us to remember and keep three holidays – Pesach, Shavuot and Sukkot.  Passover celebrates our Exodus from Egypt;  Shavuot remembers the giving of the Torah and Sukkot continues the story.  The holiday we celebrate immediately after the solemn day of Yom Kippur recalls our 40 year journey in the desert.  It was during that journey, our tradition says, when our ancestors escaped the sun by living in huts or sukkot. These little huts were put up as temporary shelters during their wanderings. With G-d’s help, our people survived the desert, made it to the Holy Land and made their own  permanent homes.

And there’s something else.  In Biblical times Sukkot was the main holiday for Jewish people.  The reason is a simple one. Most of our fore mothers and forefathers were farmers so their whole lives depended on the harvest.  Once the main harvest was in, they could stop, take a deep breath, and enjoy themselves. They called Sukkot, “He-hag.”  That’s Hebrew for “The Festival” The big one, the mother of all celebrations. In the Bible we find another name for Sukkot – “Hag Adonai” — God’s festival. That’s how big and important Sukkot was to our ancestors.

What’s a festival without symbols those special items that help us remember the holiday and keep that memory fresh. On Pesach we eat matzah to remind ourselves of our hasty exit from Egypt. On Chanukah we light the Menorah to remind ourselves of  the miracle of the drop of oil burning for eight days and nights.    And on Sukkot we use a lulav and an etrog. The etrog  is a citrus fruit grown in Israel.  It’s kind of a cross between a lemon, an orange and a grapefruit.  The Bible calls it “the fruit of a goodly tree.” Then the Bible tells us to take “Branches of palm trees, leafy trees and of the willow of the brook.” We bind them together in a big bouquet and presto, we have a “Lulav.”

There is a midrash – a Torah story that says that the four species of growing things are symbolic of  the Jewish people. The etrog has taste and fragrance, which reminds us that some Jews have knowledge of the Torah and do good deeds.

Then there’s the palm and its fruit, the date.  It has taste but no fragrance — like some Jews, they have knowledge of the Torah but are still waiting to do good deeds. The myrtle has fragrance, but no taste just like some other Jews who haven’t yet studied Torah, but fill their days doing good deeds. And then there are the “willow” Jews.  The willow has no taste and no fragrance either which implies that there are some Jews who haven’t yet studied Torah and haven’t yet begun to do mitzvoth – they are just waiting or beginning to do good deeds.

But the real point here is that the etrog, the palm, the myrtle and the willow are all bound together.  We don’t keep one and ignore the others. Instead we join them together the way all Jews are joined together.

The symbols of the Etrog and the lulav tell us that every Jew is a valuable Jew.  That a Jew from a Reform background stands tal l with a Jew from a Conservative background. That Jews who grew up Orthodox show love and respect for Jews who haven’t yet studied and show special understanding for Jews new or returning to Judaism – the ones we say “hold the book upside down!

Jews who wear the black hats and coats are not “funnly looking,” “weird” or “Old World,” but are to be but are respected for their tie to tradition  —the same way we respect any Jew who walks into any synagogue after a long time  of having been away.

And then there are the Jewish men and women who are part of interfaith families — they and their children are as valuable to our Jewish community as any other Jew from any other background – including Jews-by-Choice.

So the lulav has an important, modern day, relevant story to tell us, because not only do we stand together, but we stand tall as part of the Jewish people. Just as these branches are tied together,  every single time  we allow ourselves to create ties with other Jews we are living examples of the lulav because we are carrying out one of the oldest and most important parts of our Jewish tradition.

And, as we wave the lulav North, South, East, and West, Up and Down, we are reminded that as Jews we are bound together and we stand together.  If we are willing to reach out and attach ourselves to more and more of our Jewish brothers and sisters, the rewards are truly great.  We will reap the rewards of this spiritual harvest – a real basket of plenty that is our Jewish traditionand represents our Jewish life. Sukkot reminds us that we Jews are indeed a basket of plenty that includes each and every one of us – a basket that always has room for one more.