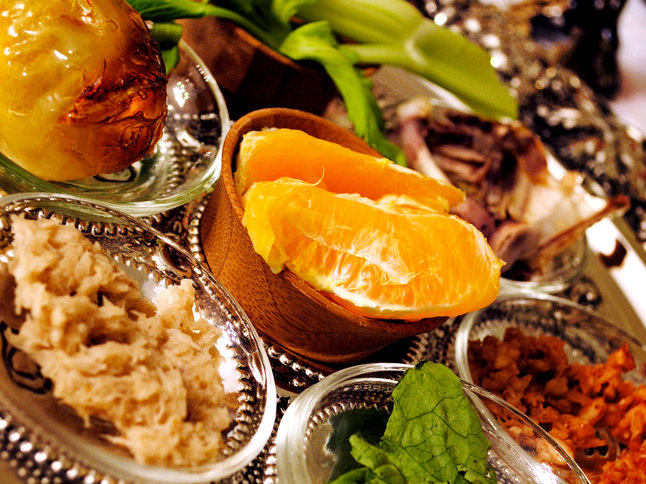 Let’s “Dish” About the Seder Plate!

In ancient times our sages taught that in anticipation of the Passover holiday, we Jews should prepare a specially made, large wicker container in which to place Passover’s symbolic foods. This wicker container would then be displayed on the seder table.

That’s right. The first seder plate wasn’t made of  china or ceramic, pewter or silver – it was more like a wicker basket. And it most likely wasn’t round. In fact historians tell us that the actual name was “ke’arah” which is the Hebrew word, not for “plate” but for “tray.”

We find the first mention of what was to become the central focus of the seder table, the plate or the “ke’arah,” in the Mishnah. Written in about the third century CE, the Mishnah, which is the earliest compilation of Jewish Oral Law, features  most of the rituals and prayers required for the Passover seder including directions for preparing what has become known as the seder plate.

Later, during the medieval period when Ashkenazi Jews began to write and publish “haggadot,” (the booklet used at the Passover seder to explain the meaning of the Exodus from Egypt), drawings of a large, round seder plate began to appear in the illustrations. However, the haggadot published by the Sephardi Jews of Spain, Portugal, Italy, as well as in the Middle East, often depicted the seder plate as the traditional wicker basket.

But before long Sephardi Jewish communities whose artisans had learned to create ceramic art moved away from the wicker basket and in 15th century Spain began to craft large ceramic plates replete with illustrations highlighting not only Jewish but Islamic culture as well. Thus the Passover Seder Plate as an art form was born.

In 18th-century Germany, Jews who were asked to make seder plates made of pewter began to add engraved illustrations, Hebrew phrases and inscriptions were added to the plates themselves, while wealthy families in 18th and 19th century Germany commissioned ornate silver plates that featured  intricately engraved scenes from the haggadah. Later on Jewish artisans were commissioned to create a three-tiered seder plate with a special opening designed to contain the three pieces of matzah, the unleavened bread that was carried by Jewish women during our escape from slavery in Egypt.

Today seder plates are often passed down in families, from grandparents, to parents to children, and in some cultures the plate itself makes a grand entrance to the seder table.

In Morocco the seder plate is brought to the Passover table with great ceremony. Covered with a beautiful transparent cloth, the plate is carried by the seder leader as the assembled guests greet its arrival with a joyful song.

In Tunisia, Southern Italy and the islands of Sicily and Sardinia the seder plate is also welcomed with great aplomb as it is carried to the table by the “lady of the house.” It is customary that she then holds the plate over the head of the seder leader who then takes the plate and standing behind each guest, holds the plate over each person’s head. The seder begins in this manner to demonstrate that although we were once slaves in Egypt and carried heavy burdens on our heads, today we are free to choose to “carry” the seder plate, a symbol of the precious gift of freedom.