The War on Ukraine – Many American Jews say, “For Us It’s Personal” 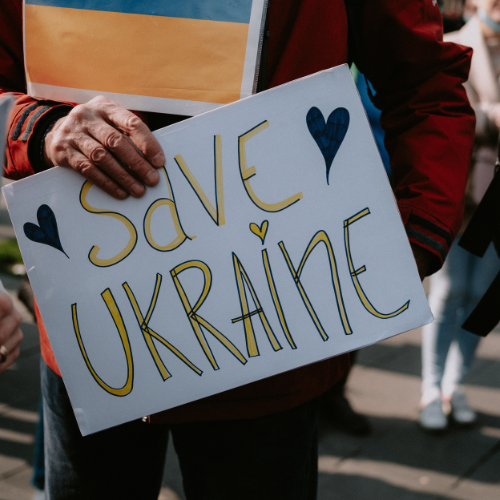 For many among us, including Roseann Barr, Leonard Nimoy, Isaac Stern, Carl Sagan, Amy Schumer and Chuck Schumer, Ukraine is our ancestral home. More than ten percent of American Jews have had parents or grandparents that, when they waxed nostalgic about the “Old Country”, were talking about Ukraine. No surprise there, especially since statistics bear out bubby and zayde’s reminiscences. That’s because at its high point, Ukraine had a population of more than one million Jews, one hundred percent of whom spoke Yiddish.

The statisticians of the Pew research group tell us that before the tragedy that was World War II, nearly one-third of Ukraine’s urban population consisted of Jews which means that “Landsmen” were the largest national minority in all of Ukraine. But not for long. During the Holocaust years, one million Ukrainian Jews were killed, which amounted to 70 percent of Ukraine’s Jewish population.

Up close and personal, those of us with Ukrainian ancestry shudder when we hear of bombings and other atrocities perpetrated on the men, women and children in Kyiv, Dnipro, Kharkiv and Odessa – cities familiar to many American Jews mainly because the Jewish populations of these cities once totaled more than one quarter million Jews.

“I feel like I’ve been down this road before,” says Sy, who remembers his Ukrainian grandfather and his love for the Baal Shem Tov, founder of the Chassidic movement, who, like Sy and his ancestors, was a Ukrainian Jew. “I watch every news program that talks about the war. It breaks my heart to think that this horror is happening again, not just to the Jews left in Ukraine but to everyone else, too. But this time it’s different. I give what I can to the relief organizations, mainly because it feels like God is giving Europe a second chance.”

In an iconic scene in Steven Spielberg’s classic film, “Schindler’s List”, cattle cars filled to capacity with Jewish men, women and children, rumbled through the outskirts of German towns and villages, often with local residents gawking at the sight. The scene includes a brief moment when a young boy gazes at the train’s pitiful cargo and, with a grin on his face, the little boy slowly draws his pointer finger across his neck in a cutthroat gesture – a graphic indication that even among the very young, in villages, hamlets and big cities throughout Europe, local citizens who observed the harassment and persecution of their Jewish friends and neighbors knew that they were headed for death. Yet, for the most part Europe did nothing.

From the beginning of the war in February and continuing to this day long lines of Ukrainian refugees wait at the Polish border, some who’ve been rescued from bombed out shelters, others who’ve seen

their homes turned to rubble, and all of whom travelled long hours, sometimes days to reach Warsaw – a World War II city often remembered for its rampant anti-semitism and home to the infamous Warsaw Ghetto, that for thousands of Jews was the second last stop before death in an extermination camp.

During the war years in cities throughout Eastern Europe, fellow countrymen and women were abandoned on sidewalks to die of starvation. Today, every effort is made to find food, shelter and clothing, water, toilet paper and even energy bars for Ukrainians who are fleeing the enemy’s wrath. It’s almost as though Poland can’t do enough and truly they can’t, because no amount of relief supplies or the smiling faces of earnest volunteers can make up for what happened not so many decades ago. But that is no reason to diminish the opportunity that the Ukrainian crisis provides.

For many American Jews, Sy’s emotional response to the war on Ukraine touches a nerve, mainly because many of us feel the same way. Elderly Jewish men and women who were privy to firsthand accounts of Ukrainian life from grandparents, or even parents, struggle to gain perspective on what seems to qualify as evil revisited. For some, old wounds reopen and long buried memories surface. For others denial sets in as we “click off” disturbing television images, while others seethe with righteous anger. For Sy, who acknowledged his special connection to Ukraine, talking openly was helpful, but whatever actions we choose to take, it seems important that we acknowledge the fact that although many generations may have passed, the war on Ukraine has an important and unique significance for many American Jews.

For ten years Rabbi Barbara Aiello served the Aviva Campus for Senior Life as resident rabbi. Her most popular columns are now published in her new book, “Aging Jewishly,” available on Amazon books. Rabbi Barbara now lives and works in Italy where she is rabbi of Italy’s first Reconstructionist synagogue. In March 2022 the congregation brought 5 Ukrainian mothers and their 9 children to Italy – to find safety, tranquility and a new life. Contact her via email HERE