The Tiny Torah Travels to Jamaica 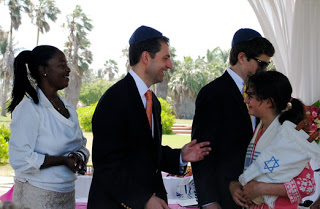 Bat Mitzvah of Chloe A.

in south central Europe, possibly in Slovenia or Romania in the years prior to 1880. We know this because after 1880, Rabbis defined the exact dimensions of a scroll and no longer accepted the smaller Torah scrolls as kosher.

These smaller scrolls were made for a particular family and for a specific reason. They were used for travel so that wealthy or very observant Jews could carry a Torah with them for study or teaching.

During times of persecution these Travelling Torah scrolls became even more important. In times of great oppression advancing armies would persecute Jews, taking their treasures and destroying ritual items. Historians credit the women of this period as the real Torah heroes, because they were the ones given the responsibility of hiding a Torah scroll–perhaps this very scroll–under their coats or beneath their clothing. 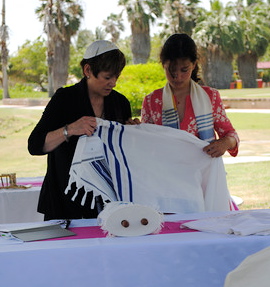 The mantle on our Travelling Torah tells another story. It is made from a fiber found in the mountains of Calabria, on a hillside near our synagogue, where Alex, Chloe’s older brother, became Bar Mitzvah last year. The mantle was designed and made by local seamstress, Rossella.

The fiber comes from a beautiful yellow-flowering plant called ginestra. The Jews of our area were the ones to discover the special uses for ginestra, and they encouraged the entire community to gather the ginestra branches. Once gathered, the branches were tied with string and placed in a copper pot of boiling water. After an hour or so, the branches were submerged in the river and held down in the flowing water by a little mountain of rocks. Then, the ginestra branches were left to soften in the river for one whole week.

After the soft fibers were stripped out of the branches and dried, the ladies would comb them between a nail-studded board. These fibers were then fed through a spindle and finally woven into a very coarse fabric, which would be used to to make mats, blankets, bags, sacks and coverings of all kinds.

This is a piece of ginestra from which the fringe on the Travelling Torah mantle was made. 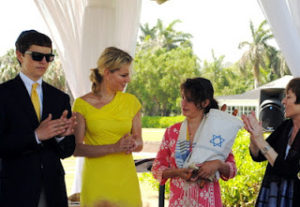 These very pieces were woven 130 years ago.

Later on, the Jews introduced the locals to the art of cultivating silk worms and spinning a softer, more pliable cloth, but the art of making ginestra fabric continues in the Calabrian hills to this day.