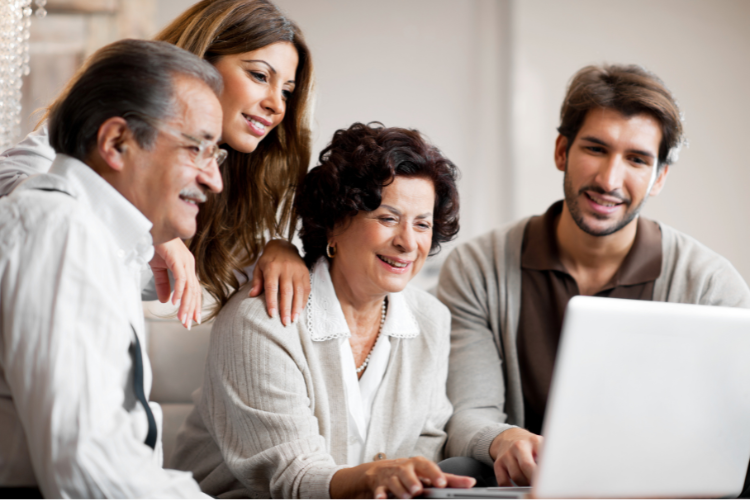 The cellphone chimed the first few bars of Jimmy Buffett’s “Margaritaville”, jolting Julie out of her ten minute afternoon “schlaf.” “Did I catch you sleeping?” It was Beth, Julie’s oldest friend – the only person other than her husband that Julie speaks with every day.

Julie responded with a sigh. “Yup, I was napping which is a whole lot better than thinking back to Passover and again this year, an empty chair at the table.”

“Elijah? You were thinking about Elijah’s empty chair?” Beth was confused. You told me you guys had a great seder.”

Julie sighed again. “We did but when I see Elijah’s chair all I can think of is Andy. It’s been six years since we had seder together.”

Andy is Julie’s adult son and although one might assume so, Andy has not died. Julie’s grief is the result of a parent/child estrangement that began six years ago and continues to this day. And to this day, Julie says that she has no idea what precipitated Andy’s total disassociation from his parents and siblings.

Julie is not alone. In an article, “Family Estrangement – What Causes It and How to Deal with It,” (Parenting for Brain, March 2022) author Pamela Li highlights that the estrangement that occurs most often is the broken relationship between adult children and their parents.

In fact a study on Family Estrangement determined that “Seven percent of adult children are estranged from mothers, while 27% have no contact with their fathers.” In addition a 2015 survey found that among a group of 354 college students 44% had experienced some type of family estrangement.

Yet studies show that there is no one type of interaction or style of parenting or one type of family conflict that will trigger an estrangement but there is one thing for certain; “parents and children’s reasons for estrangement differ significantly from one another.”

Julie echoes this frustration when she says, “I just don’t know what happened. I look back on things I said and did and I can’t figure it out. One day he stopped calling. He didn’t answer my texts and through a friend I heard that Andy decided to stop visiting us. I asked for a reason. I got nothing.”

Julie and Andy’s estrangement, painful as it is, is not uncommon. In fact current studies indicate that “A higher proportion of estranged parents than estranged children do not know exactly why they are estranged, which means children are more likely to initiate estrangement than parents.”

If you and your adult child are estranged, what can you do? In Julie’s case she began to call Andy obsessively, at first leaving lovingly voice mail messages. When she received no response, her messages became angry and accusatory. That’s when Julie realized that her approach was harmful and unhealthy for all involved.

Author Debbie Pincus, writing in “Empowering Parents,” states, “But here’s the reality: it was not your choice to sever the relationship. Although you may have contributed to the tensions between you, you are not responsible for your child’s choice to cut you off.”

Pincus shares five options that parents estranged from their adult children can apply in an attempt to resolve the broken relationship:

1) Get Support – Consider joining a parenting support group or get professional help for dealing with your sense of grief and loss.

2) Don’t Respond by Cutting Off Contact – Send birthday and holiday messages, notes and emails. Send warmth, love and compassion as you get on with your own life.

3) Don’t Feed the Anger -Pincus believes that “anger is natural but not helpful,” and recommends that, without assigning blame, parents should take an objective look at family dynamics.

4) Listen to Your Child without Defending Yourself -“If the door opens with your child, listen with an open heart.” Pincus recommends that parents who are willing to look at themselves have better chance at reopening lines of communication.

5) Focus on Yourself, Not Your Child -Let go of your pent up resentments and the emotional pain that the estrangement brought about. Put your efforts into making changes in your own attitude and behavior and demonstrate that you forgive your child.

Beth heard the agony in her friend’s voice. “Understanding and compassion can come from an unlikely source,” Beth said, as she quoted a famous Jewish young woman generally not described as a parenting guru. “Parents can only give good advice or put them on the right paths, but the final forming of a person’s character lies in their own hands.” Anne Frank

For ten years Rabbi Barbara Aiello served the Aviva Campus for Senior Life as resident rabbi. Her most popular columns are now published in her new book, “Aging Jewishly,” available on Amazon books. Rabbi Barbara now lives and works in Italy where she is rabbi of Italy’s first Reconstructionist synagogue. Contact her at Rabbi@RabbiBarbara.com.