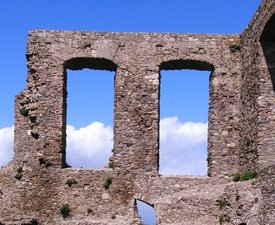 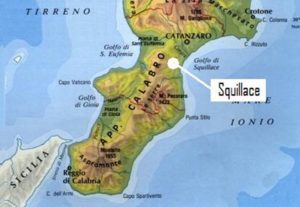 “Searching for the remnants of the historical Jewish presence in Calabria is my passion,” says Rabbi Barbara who recently applied her investigative skills to exploring Squillace, an ancient Calabrian village, known today as one of Italy’s most important archaeological sites.  Located on the coast of the Ionian Sea Squillace is a mountain fortress, complete with castle ruins . It was the Normans who built the castle (where there was a fortification of the Byzantine era – the last bastion conquered by the Arabs in Calabria in 904) and who nicknamd it nicknamed “Stridula” for the “shrill” eerie sounds made by the wind as it whistles through the castle walls

Legends about the castle abound with the most popular featuring the story of two skeletons “locked in a tender embrace.” The skeletons had been buried in the protected inside corner of the castle and were une

arthed during an archaeological exploration. The remains of the man and the woman were found lying hand in hand with their skulls facing each other – a discovery that has puzzled scholars for centuries who are irious about who they might have been an what tragdegy led to their last embrace.

Much of Squillace’s ancient history is a vibrant part of Calabrian culture but what is hardly known is that Squillace
was once a hotbed of Jewish activity. The town hosted a thriving Jewish population whose contributions to the local economy were substantial. The Jews of Squillace mined salt and traded it as a commodity – so much so that historical accounts record that one “Andrea de Ponte, deputy of the Duchy of Calabria, received from the Jews of Squillace (payment} for the September (1546) salt tax. (A Documentary History of the Jews in Italy, C. Collafemmina)

For those with a passion for castles and the legends to which they are often linked, Squillace, in the province of Catanzaro, is a must. t was the Normans who built the castle (where there was a fortification of the Byzantine era – the last bastion conquered by the Arabs in Calabria in 904), which was given the name “Stridula,” for “shrill”, indeed for the fact that the wind causes whistling within its walls.

During the same time, two skeletons “locked in a tender embrace,” were unearthed, having been buried in the inside corner of the
fortress, coinciding with the polygonal tower. Their feet turned to the northeast, having the tower as a reference, lying hand in hand, with the skulls facing each other.   These things have sparked the imagination of scholars, curious about their identity and their sad fate.  Through the scientific findings of the Superintendent of Antiquities of Calabria and the studies carried out by experts from the Ecole Francaise, it was found that the skeletons belong to a woman and a man who lived at the turn of 1200 and 1300. The male was tall 1.70 mtr the female 1.68.