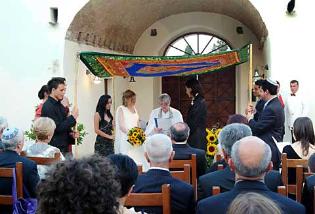 …Chuppah History from Italy and Around the World

Of all of the traditions that define the Jewish 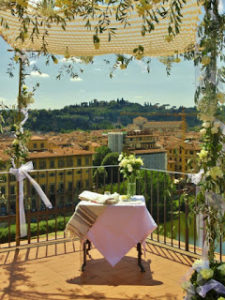 wedding ceremony, the chuppah, or bridal canopy, is one of the most symbolic and important. The canopy itself is a symbol of God’s love above the married couple as well as the home that they will now share as husband and wife. The traditional chuppah (dating back to the 1300’s) features open sky above to acknowledge God as Creator, who infuses marriage with deep spirituality and cosmic significance, while the chuppah’s four open sides symbolize the open horizons that the couple will share in married life together. For all of these reasons it is most meaningful for Jewish weddings to be held outdoors with blue sky above, and below, a surrounding panorama of natural creation.

The Chuppah History or word chuppah is a Hebrew word, whose origins are found in the Hebrew Bible in Joel Chapter 2 as well as in Psalm 19. The traditional cloth canopy and four supporting poles has come to represent the Jewish home. Additionally, it serves to remind us Abraham’s tent that was open on all four sides—the world’s first indication of the value of hospitality. During the ceremony, no chairs or other furnishings are placed under the chuppah to indicate that more important than possessions, are the people who live inside. This alone is the foundation of a Jewish home.

As a rabbi who officiates for Jewish and Jewish Interfaith weddings in Italy,

I often help couples incorporate Italian Jewish traditions into their ceremony.  For example, in the Italian Jewish wedding it is traditional to use a crocheted tablecloth or bed covering which, after the ceremony, will be used in the couple’s home. In fact, the Italian phrase, “sotto la coperta,” (or “under the covering”) signifies the bridal canopy from ancient times. Canopies are often passed from generation to generation as family heirlooms, while other brides and grooms might create their own chuppah covering that has its own special meaning.

The basic structure of the chuppah, a canopy supported by four poles, can be as decorative or as simple as suits the taste of bride and groom. Festooned with flowers, vines, olive branches or ivy, many chuppot visually represent the personality of the budding family it houses.