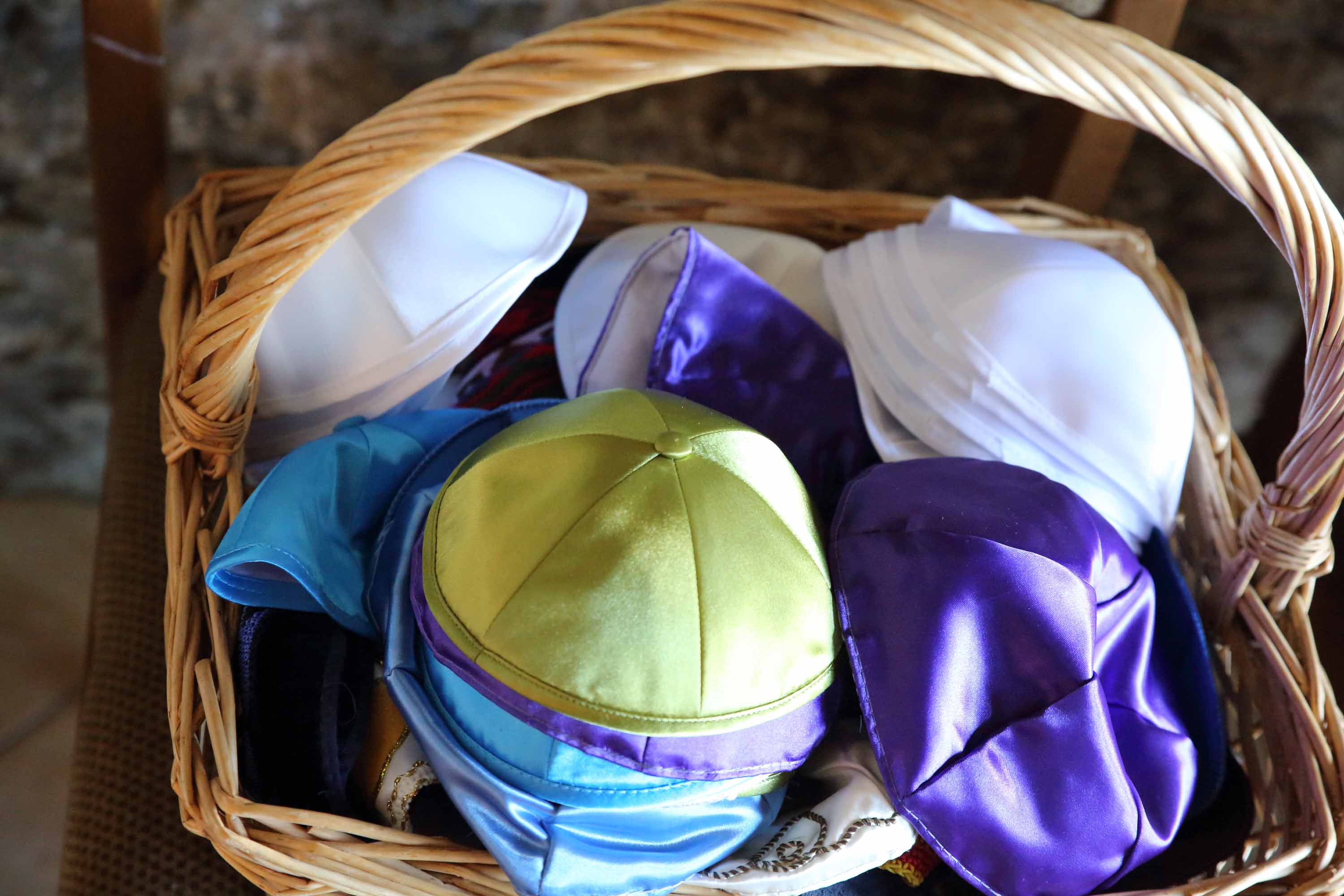 I just don’t know what to do with these,” said Charna as she lifted a handful of commemorative yarmulkes from a bulging dresser drawer.  “I’ve hung on to them for years,” she said, recalling the simchas she’s shared with family and friends. “I just can’t let them go.”

Charna is not alone. For many bubbes and zaydes the tradition of the personalized kipah (the Hebrew word for “yarmulke”) has held a place of honor in the treasure trove of memories that Jewish families hold dear.  But what to do with a drawer full of Jewish head coverings?  That was Charna’s question and creative bubbe, Shirley, had the answer.

“I was digging through my yarmulke drawer,” said Shirley, “and it came to me. I could use all these yarmulkes to make a game for my grandchildren and great grands.” And that’s just what Shirley did. One rainy afternoon when two of her nine great grandchildren were visiting, Shirley pulled out the drawer and dumped about two dozen yarmulkes on the kitchen table.

“You kids can each pick a yarmulke,” Shirley directed, as the children, ages seven and nine, plowed through the pile, selecting a color or style that appealed them.  “Now,” Shirley said, “Let’s read what’s inside.” Taking turns the children read “David’s Bar Mitzvah, November 10, 1988,” and “Mazel Tov Jeffrey and Kim, July 4, 2011.”

Now it was Shirley’s turn. “Let me tell you about David’s Bar Mitzvah,” she said.  “It was twenty-nine years ago, when David was 13 years old. How old is David now?” she asked?  Shirley’s great grandson quickly calculated that David of yarmulke fame now would be forty-two years old.

At this juncture Shirley, who shared that “David” is her nephew, offered a bit more information about him. “David lives in Arizona,” she explained and asked, “Now you tell me, what do you think David is like? “ And with yarmulke in hand, “David” came to life as the children speculated about living in Arizona, how hot and dry it must be, and what David might be doing for work and for recreation.

“Put David’s yarmulke on your head,” Shirley instructed her great grandson. “Now you’re David and you’re all grown up. Tell us about yourself.” As the 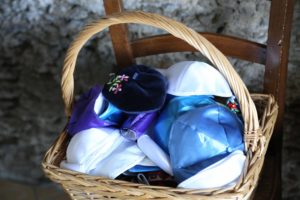 youngster began to weave a fantastic story about David as a superhero, Bubbe Shirley phoned the real David and had him listen in. “The kids love my yarmulke game,” Shirley says. “They can create fantastic stories based on the tiny bit of information printed inside the kipah. Their imaginations run wild and we have a lot of fun.”

When Shirley shared the Yarmulke Game with her mahjong club, the ladies were intrigued and several gave it a try.  Shirley recalls, “One of the girls even videoed her five year old great granddaughter telling an incredible story about a magic yarmulke that when the bride put it on her head, she could fly. The bride in the story was my friend’s great niece. She was tickled to see the video of this little one wearing the wedding yarmulke and flapping her arms like wings!”

Could it be that a Jewish item, something that among the many Jewish artifacts we’ve collected over the years  – an item that might be thought of as less than ritually significant, could a little yarmulke really play an important part in sharing Yiddishkeit with the next generation?

In the words of Cantor Lorel Zar-Kessler, “We keep the memory alive by passing on the rituals we have received.” Shirley would agree, not only with the cantor but with a midrash that states, “Looking leads to remembering and remembering leads to doing.”

As Shirley looked into the yarmulke drawer, the midrash came alive. Precious memories returned –  memories that can be shared creatively with future generations –all thanks to Shirley’s taking an action by inventing the Yarmulke Game.