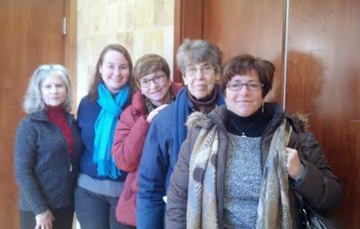 Marcia and Rabbi met via the Italian Jewish Cultural Center of Calabria (IjCCC) when Rabbi helped Marcia discover the Jewish roots of her family’s Italian surnames. Marcia describes her remarkable Jewish journey which includes a deeply spiritual experience at the Hayim Mayim Mikveh in Boston, USA.​ You can also access this post on Marcia’s blog, The Mikvah Lady Has Left the Building.

It was an honor to introduce Rabbi Barbara Aiello to Mayyim Hayyim during her February 2014 Boston visit to serve as a Scholar-in-Residence at Temple Beth David of Westwood. While all annual Scholar Programs at my temple have enhanced my ongoing Jewish learning, this one was particularly personal for me. I am an Italian American “baby boomer” raised Catholic who has discovered and embraced her Jewish ancestry. Both Rabbi Aiello and Mayyim Hayyim represent the beginning and ending of my spiritual journey “home” to Judaism.

Rabbi Aiello is rabbi of Sinagoga Ner Tamid del Sud, the first active synagogue in Calabria, Italy in 500 years since Inquisition times. She is the first and only woman and non-orthodox rabbi in Italy. Born and raised in Pittsburg, Rabbi Aiello traces her roots back nearly five centuries to Serrastretta in Calabria. Hers was one of five Jewish families who founded the town 460 years ago as they fled persecution. 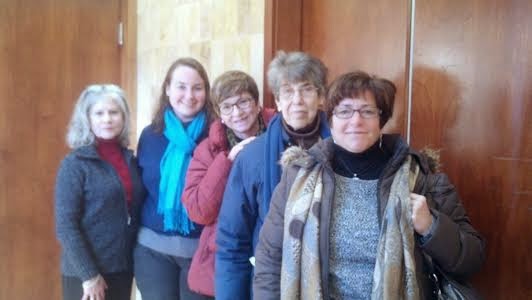 My ritual conversion took place on January 23, 2012, at Mayyim Hayyim. Simply put, it was a highly dignified and profoundly validating experience. My spiritual journey to Judaism had begun decades before. I always felt strongly connected to Judaism especially when I learned from my many Jewish friends and colleagues about its teachings, and I comfortably shared with them its practices. I was often told that I possess a Jewish soul. But it was not until 2010 when I met Rabbi Aiello after I decided to convert to Judaism that I fully understood my lifelong attraction to and affinity for the faith.

In 2007, Rabbi Aiello founded the Italian Jewish Cultural Center of Calabria (IjCCC), an organization that helps Italians and Italian Americans discover the Jewish heritage of their surnames. She is also founder of the B’nei Anousim (a Hebrew phrase that means “children of the forced ones”) movement in Southern Italy, an initiative to help the “hidden” Jews of Calabria and Sicily whose ancestors were forced into Christian conversion return to Judaism.

Archival research conducted by the IjCCC reports that individuals with the surname of my great grandmother “Rachela” (Rachel) who was born in Southern Italy: 1) are listed in Inquisition records of those brought before the Inquisition authorities under suspicion of practicing Jewish ritual in secret after they had been forced into conversion to Christianity, 2) are listed in Nazi Deportation Records, and 3) appear on the rolls of those recognized today as Jewish by the Italian Jewish Community. And analysis of my DNA finds my ancestry to be Middle Eastern (Jewish) and European (Spanish and Italian). Remarkably, this profile traces the centuries-long geographic journey of some of my ancestors: Jews originating in the Land of Canaan who migrated to the Iberian Peninsula, Jews expelled from Spain during the Inquisition who sought refuge in Southern Italy, and Jews who settled permanently in Southern Italy and eventually became B’nei Anousim. Until Rabbi Aiello’s groundbreaking research began to uncover the “hidden” Jews of Southern Italy, many of us with Southern Italian roots had no knowledge of our Jewish ancestry. 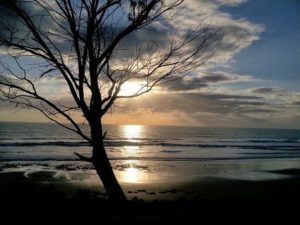 When Rabbi Aiello toured Mayyim Hayyim, she learned that it is a 21st-century creation rooted in ancient tradition and reinvented to serve the Jewish Community of today; a resource for learning, spiritual discovery, and creativity where women and men of all ages can celebrate milestones such as conversions and weddings; and a place where survivors of trauma, illness, or loss can find solace.

As I immersed in the “living waters” of Mayyim Hayyim, my eyes filled with tears. They were an expression of my overwhelming joy and peace to have finally returned home to the Jewish faith of my ancestors. In memory of my great grandmother Rachela, I choose Rachel as my Hebrew name.

Recently retired from a 30-year career as an Immigration Legal Specialist in Washington, D.C. and Boston, Marcia enjoys spending more time with family and friends, volunteering, and traveling the world.