The Cat That Ate the Cannoli: Tales of the Hidden Jews of Southern Italy

The first in a series of Rabbi Barbara Aiello Books, a tabby cat, an Italian confection, and a young girl on the threshold of adulthood… A family gathers atop a mountain in Calabria, Italy where hidden Jews have practiced in secret for 500 years. As a rabbi unrolls a Torah scroll, inscribed in Hebrew in 1783, the ancient words illuminate the restored sanctuary, once a hidden prayer room, now brought to life in worship and song. The Italian-American rabbi is determined to uncover the Jewish roots buried in these hills, lost through centuries of persecution and obscured by decades of misunderstanding. Faced with more questions than answers, the tenacious rabbi overcomes the obstacles thrown her way by traditional colleagues to uncover the Jewish heritage that many believe had been lost forever. When was the last time you had the author of the book your Book Club was reading meet with your club? After having your club select, “The Cat That Ate the Cannoli: Tales of the Hidden Jews of Southern Italy”, your club can have Rabbi Barbara discuss the book with them. Simply email Rabbi Barbara by clicking here and find out about fees and Rabbi’s availability!

“The Sarasota Bay Book Club met on Thursday, February 4, 2016 to discuss The Cat that Ate the Cannoli: Tales of the Hidden Jews of Southern Italy, by Rabbi Barbara Aiello.  We were honored to have Rabbi Barbara present her book and tell us about her experiences in Calabria and Sicily, where she founded the B’nei Anusim movement, and is Director of the Italian Jewish Cultural Center of Calabria.  She has helped countless Italians uncover their roots and embrace their Judaic faith.  They are descendants of the Inquisition that started in Spain and spread throughout Italy, who became conversos, pretending to be Christian while secretly observing their Jewish rituals, which have endured through 500 years.  She  eloquently told poignant stories of people who have found great joy in the ultimate recognition of their heritage.” “I am honored and delighted to have been a part of this wonderful book that features our uniquely Italian Passover traditions – including the secret “Seder Hamishi” that originated in Inquisition times. In Sicily and Calabria Christian families invited their Jewish neighbors to come to their homes to secretly hold a Passover seder.” ~Rabbi Barbara Aiello

During Passover, Jews are reminded of how, more than three thousand years ago, their ancestors emerged from slavery to become free men and women. Bestselling author Monique Polak explores her own Jewish roots as she tells the Passover story, which reminds us that the freedom to be who we are and practice our religion, whatever it may be, is a great gift. It also teaches us that if we summon our courage and look out for each other, we can endure and overcome the most challenging circumstances. Enlivened by personal stories, Passover reminds us that we can all endure and overcome the most challenging circumstances. From its gorgeous coastline, national parks, and fabulous festivals to its ancient ruins, cobblestone streets, and renowned cuisine, Calabria has got something for everyone.

Michelle Fabio, author of the popular Bleeding Espresso blog, is the perfect virtual tour guide to help you make your way around the toe of the boot. Michelle has lived in Calabria for more than a decade and these are her picks for how you should spend your time there.

Whether you’re planning a trip or are a descendant of Calabria who wants to learn more about this ancient, beautiful land and all it offers, this book–the only Calabria travel guide written by a local in English–is for you. 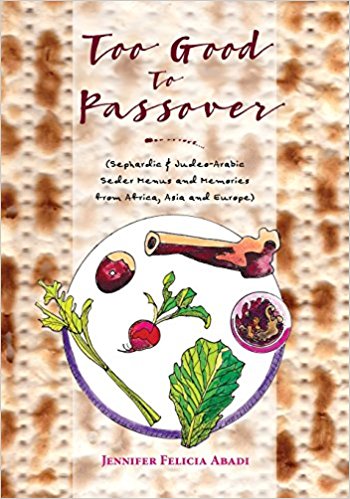 Too Good To Passover: Sephardic & Judeo-Arabic Seder Menus and Memories from Africa, Asia and Europe

Kudos to author Jennifer Abadi for a masterful work that combines kitchen and  culture – passover recipes, stories and delightful traditions from around the world. Our Calabrian Jewish traditions are featured in the section on Italy. It is an honor for me to be a part of this “libro fabuloso.”