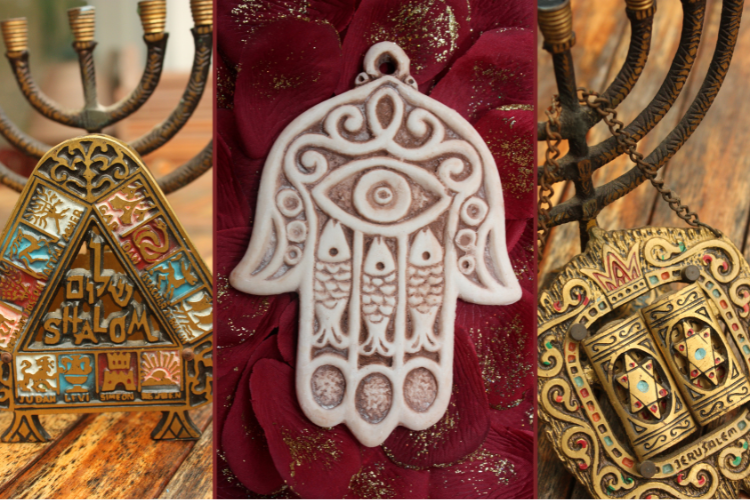 Popular in jewelry, ceramics, and pottery art the five-fingered, hand-shaped symbol, called the Hamsa, commands a prominent place in Jewish tradition, so much so that historians believe that it is as ubiquitous as the Magen David (Star of David).

The word, “Hamsa” derives from the Hebrew word for the number five, is rich in Sephardic Jewish tradition.  The symbol was first used by the Jewish people of Mediterranean countries.  The Jews of Morocco, Spain, Portugal, and Italy referred to the Hamsa as the “Hand of Miriam” because they believed that, just as Miriam protected her baby brother Moses, the Hamsa had the same protective powers.

Later on, Jews in Eastern Europe referred to the Hamsa as a symbol for the Creator’s protective hand.  One thousand years later the Hamsa appeared in Muslim culture as the “Hand of Fatima.”

The popular website, “My Jewish Learning,” answers the question, “What is a Hamsa and what makes it Jewish?

In many depictions, the Hamsa features an eye embedded in the palm of an open hand which gave rise to the Islamic explanation that the Hamsa symbolized the “Eye of Fatima” or the “Hand of Fatima.”  For Jews the symbol was described as the “Hand of Miriam.” Thus, the Hamsa has been variously interpreted by scholars as both a Jewish, and an Islamic amulet recognized for its Kabbalistic roots and an important symbol in Jewish tradition.

Historians believe that the Hamsa first appeared on the Puerta Judiciaria (Gate of Judgment) of the Alhambra, a 14th-century Islamic fortress in southern Spain. However, it would not have been unusual for an Islamic symbol to find its way into Sephardic Jewish culture, especially since Jews and Muslims lived together peacefully for centuries. This is especially true in Sicily where the two cultures and religions lived, worked, and observed sided by side for more than 300 years.

My Jewish Learning states that “It is difficult to pinpoint the exact time when Hamsas emerged in Jewish culture, though it is clearly a symbol of Sephardic nature.” Experts contend that for Jews the Hamsa may have symbolized the hand of God and that the person carrying the Hamsa would counter the effects of the Evil Eye.

Interestingly, the ancient tradition of the Hamsa can be found in Sephardic Jewish rituals. Among the more popular is the henna ceremony when a bride’s hands are decorated with elaborate designs, among them the hamsa symbol. In addition, Sephardic Jewish brides may add the wearing of a Hamsa as a bracelet or necklace, even when tradition requires that jewelry not be worn on the wedding day.