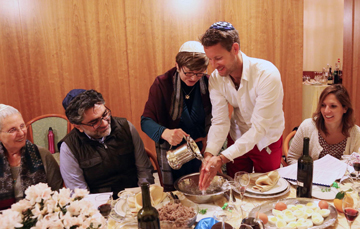 Some historians believe that the Russian painter, Moshe Maimon’s most famous work, 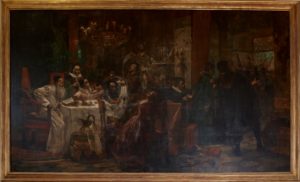 “Marranos: Secret Seder,” actually tells the story of the Seder Hamishi, a secret passover tradition, a special Passover seder, held, not on the first or second night of Passover, but, as its name suggests, on the fifth night of the holiday. Legend has it that during the time of the Inquisition, first in Spain, then in Portugal and finally on the islands of Sicily and Sardinia and into Italy’s mainland, Jews who had been forced into Christian conversion (b’nai anusim) were helped, surprisingly, by their Christian neighbors.

“Neofiti,” as these newly minted Christians were called, continued to arouse the suspicion of Inquisition authorities – so much so that gardeners, maids, cooks and nannies who worked in households of converted Jews were offered a bounty if they could catch their employer cleaning the house of “chametz,” (leavened bread), changing pots, pans and dishes, or preparing “pane azimo,” or “matzah,” the unleavened bread eaten during the Passover holiday. And then, when the first night of Passover finally arrived, Inquisition soldiers, who laid in wait for the sun to set, would burst through the doors of what had once been Jewish homes, checking to see if any of these former Jews were “judaizing,” – in this case, making Passover in secret.

Observing this injustice, some courageous Christians concocted a plan to help their Jewish neighbors. At great personal peril to themselves and their families (Christians who helped Jews were often tortured and murdered along with the Jews they tried to save), these Christians encouraged their Jewish neighbors to hold a seder, not on the first or second night, but, in order not to arouse the authorities’ suspicions, on the fifth night. Stories are told of Christian families who allowed Jews to sneak into their Christian “cantinas,” (basement rooms) and under the cover of darkness, these Jewish neighbors first made the space kosher and then actually observed Passover complete with symbolic foods, prayers and blessings.

Over the years the fifth night seder became known as the Seder Hamishi – a doubly appropriate name especially since “hamish” is the Yiddish word for cozy, homey and friendly.

Here in Calabria, in the deep south of Italy or what we like to call “the toe of the Italian boot,” our b’nai anusim continue the tradition of the Seder Hamishi. Eight years ago when Sinagoga Ner Tamid del Sud (“The Eternal Light of the South”) first revived the Seder Haimshi in the town of Selinunte on the island of Sicily, friends and families, both Jewish and Christian, have gathered annually to celebrate this remarkable Passover event.

Each year we hold the Seder Hamishi in the Calabrian town of Lamezia Terme (formerly Nicastro) near to “Timpone,” the old Jewish quarter, that is still intact. Seder guests tour “Timpone,” lodged at the foot of the castle of King Fredrick II, a monarch who recognized the valuable contribution that these Italian Jews made to the local economy and who offered them safety and protection. Following the tour, concert violinist, Angela Amato, whose ancestors were forced into Christian conversion and who, along with her son, Ale, has returned to their Jewish roots, initiates this historic seder with musical selections in Ladino, the ancient Spanish-Hebrew language of the Mediterranean Jews.
Symbolic seder foods include the traditional shank bone but for us anusim it is coupled with the “bietola,” (blood red beet) to symbolize the lamb’s blood on the doorposts that saved the firstborn in Hebrew families. Locally grown romaine lettuce (more bitter than the American variety) replaces horseradish and pieces of celery stalk, rather than parsley, serve as “karpas,” the green vegetable that is dipped in vinegar, rather than salt water. The traditional egg on the Italian seder plate is a rich brown in color, because it has been roasted for hours with onion skins, vinegar and saffron. 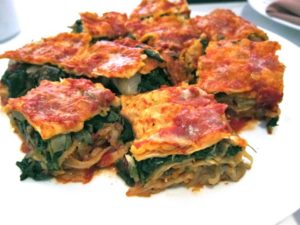 The seder meal begins with a “primo piatto” of rice steamed with vegetables, because in our Sephardi or Mediterranean tradition, rice as well as other kitniyot are considered kosher for Pesach. Roasted lamb is a must along with “mina,” a layered lasagna-type meat, spinach and matzah pie brought to Italy from Spain by our crypto-Jewish ancestors.

Pesach anusim traditions begin with the lighting of the memorial candle in honor of our “forced ones,” followed by the candle blessing for Shabbat and Yom Tov, sung in an ancient Ladino melody. The seder plate itself is actually a “ke’arah,” a woven basket-type tray covered with silk netting that makes a grand entrance to the seder table after the kindling of light.

At the singing of “Ha lachma anya,” the plate of matzah is passed shoulder to shoulder among the guests, a symbol of the heavy burden of slavery. A tin can placed at the head of the table takes center stage for the recitation of the Ten Plagues as a splash of wine punctuates each plague. When the can is filled, the younger guests carry the can into a far corner of the garden with the admonition, “May our enemies stay far from our door.” Then it’s a rousing version of Dayenu which features green onion stalks that guests use to tap each other, symbolizing the sound of the whips used to beat the Hebrew slaves.

For me, a bat anusim or “daughter of the forced ones,” leading the Seder Hamishi , a secret Passover tradition,each year in Southern Italy is one of the most emotional experiences of my rabbinic career. As we read the ancient blessings I recall my own family’s history when my nonna carried candles to the cellar to kindle the lights of Shabbat. Now as each Seder Hamishi brings with it the realization that fear and prejudice nearly extinguished our heritage, this understanding is coupled with a deep sense of gratitude to the nameless Christians whose courage helped preserve the very traditions that I am able to enjoy today.

This year in Calabria we Jews, who were nearly robbed of our religion, our culture and our heritage bring the light of Pesach out of the cantina and into the hearts of our brothers and sisters who, after 500 years, now have a new opportunity to do as Torah commands and become “a light unto the nations.” The seder concludes with the traditional wish, “Next year in Jerusalem.” For me and my fellow b’nai anusim whom I serve here in the deep south of Italy, we add, Baruch HaShem, “Next year in Calabria,” too