Back to School in Italy 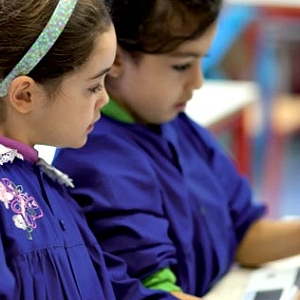 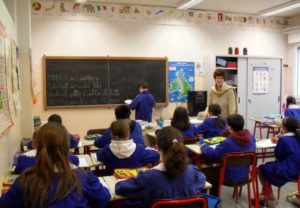 It’s back to school in Bella Italia with school bells ringing (literally) in Serrastretta, my tiny village in the mountains of Calabria. Children in many of our mountain communities will attend classes from 8:00 am until 4:30 pm, six days a week, Saturdays included!  Although students are permitted one hour for “pranzo,” (lunch), that still amounts to a great deal of time spent learning the Three R’s.  Often criticized for a lack of after school activities, it appears to me that Italian schools make the grade where academics are concerned.

In her article that appeared in Italy Magazine (2014) Katia Amore writes about Italian schools in “Back to School: 10 Things You Should Know About the Italian School System,” and in her informative piece she describes the charming “grembiule.” Italian schools do not require uniforms but “children in kindergarten and primary schools wear a ‘grembiule‘, a school smock. Boys at the ‘asilo‘ (kindergarten) usually wear a blue and white checked “grembiule,” while girls wear a pink/red and white checked one. In elementary schools, the color of the smock is deep blue.”

So dressed with their grembiulini over their street clothes, students spend five years in primary school within an educational curriculum that includes in Italian, English, mathematics, natural sciences, history, geography, social studies, physical education, visual and musical arts.  Ms. Amore emphasizes, “There are three main teachers per class, plus an English language teacher who works with children across several classes.”

Catholic religion classes are offered once or twice per week, however Jewish, Muslim and Hindu children (and others) may opt for classes in peace studies or conflict resolution. In addition, in most cities and towns Jewish children are excused from Saturday classes but since school is in session on Saturdays, many choose to attend. And since there are only four Jewish day schools in all of Italy (Rome, Milan, Turin and Trieste) observing Shabbat is challenging for many Jewish families.

During my years in Italy I have taught English to elementary and middle school students and I was routinely pleasantly surprised by the knowledge and comportment of my students. Most knew the name of every state in the USA and many could recite the state capitals. But most astounding – each day when I entered the classroom the students stood up and greeted me in unison, “Buona Serra, Professoressa!” As we say in America, “Awesome!”